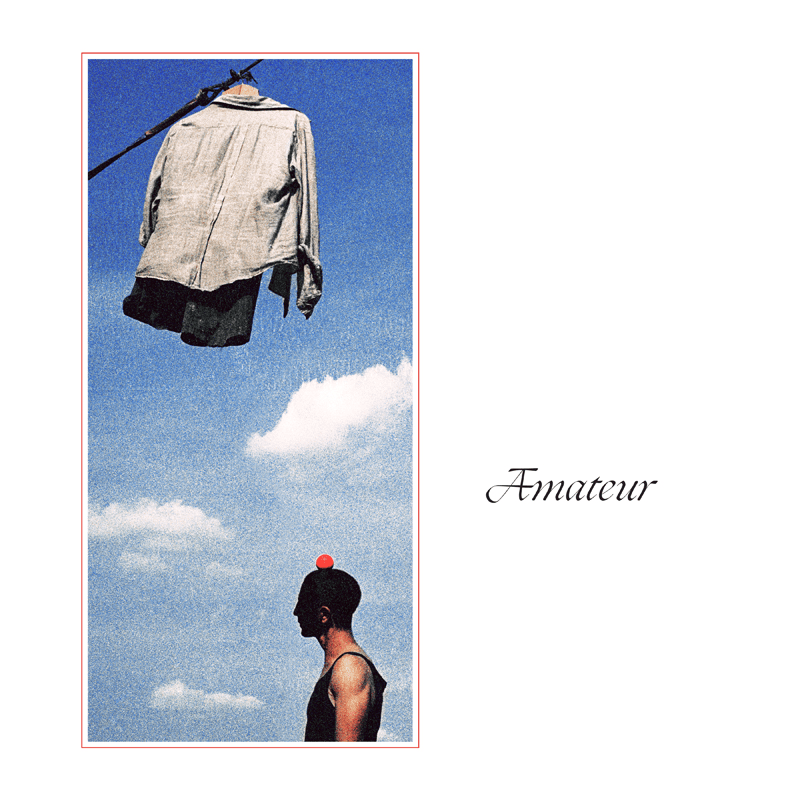 50 WAYS NOT TO MAKE A RECORD

(or, The Record So Nice I Made it Twice)

I wrote Amateur during the fall of 2015 while walking around Ottawa, sitting on park benches, and singing into my cellphone. I turned 22 in November, and I found out that I'd be moving to Italy the following spring for a year-long design residency. Things looked good.

The winter was spent recording in makeshift studios: my bedroom closet, basement crawlspace, the living rooms of friends' apartments, the record store up the street, and my office at night, after everyone had left. I finished up in March, then boarded a plane to Italy.

It turned out the residency was more like a job. I worked, ate pizza, and drank wine with my new friends. Twice that summer I mixed the record, scrapped it, then started all over again. It was so hot that my laptop trackpad burnt my index finger, and my headphones left drips of black sweat down my neck.

Eight months into the residency, on the evening of our Christmas party, my boss fired me. He said that I wasn't focused enough at work, which was true—I found music to be far more interesting than designing postcards for mega corporations—so I shaved my head in the bathtub, said a teary goodbye to everyone, and took an overnight bus to Rotterdam, where my friend Michael lived.

Michael was renting an ex-brothel from a squat-prevention agency, and used a windowless room in the centre of his flat as a music studio. On a typical day I'd wake up, eat some oatmeal, smoke a cigarette by the river, mix for 14 hours, smoke a joint, eat an apple, maybe buy some dark chocolate from Albert Heijn, mix some more, then fall asleep on the couch, tossing in THC-cocoa dreams.

I repeated this process for a month.

Unsurprisingly, when I listened to the masters at the end of January, my heart crumpled up like an empty milk carton. Shame and embarrassment surged through my body; for the first time in my life I had made something I hated—and I hated myself for making it. (N.B: The backdrop of early 2017 didn't help much either: Trump, Brexit, European migrant crisis, et al. Things didn't look good.)

So, like the failed artist I was, I moved to Berlin, took a vow of silence, and wandered through the frozen city drinking litres of Warsteiner and rolling cigarettes with numb hands; trying not to think about my terrible album, or the people that I loved back in Canada, or what I'd do when my bank account stopped drawing 20s from the geldautomat.

Three months slipped by, and my European visa expired. I returned to Canada in the spring, a year after I had left. Everyone had developed funny accents while I was away.

That summer I worked up the courage to try finishing the record, again. I stripped down the arrangements, removed a couple of songs, and mixed it on an old analogue board, hoping to avoid the rabbit-hole pitfalls of a computer. The results were charming but sloppy, and I spent six months re-mastering the album in my apartment.

This was the version of Amateur that came out in 2018.

Music died for me after that. I didn't want to hear those songs again, let alone play them. I stopped performing, stopped going to shows, and stopped thinking of myself as a musician.

A year and a half passed while I made dinner and read books and battled my ego in other subtle ways. Eventually I started writing poetry, some of which slyly turned into songs. By the end of 2019 I had enough material to fill a set, and the universe provided me an opportunity to play in Taiwan.

At my concert in Taipei, one of the promoters introduced me to a fellow named Seki, who worked for a Japanese record label called MIDI, which put out Yellow Magic Orchestra back in the 80s. He enjoyed my set. He also lived in Canada as a child, and adored Mennonites and maple syrup. We hit it off.

Our paths crossed again a few days later, at a music festival in Tainan. At the closing party, he asked if I'd like to have a drink with his boss, Mr. Okura. I said yes, and we made plans to meet at midnight.

I found the Japanese-style bar nestled in an alleyway, where a silver-haired man wearing a threadbare suit jacket was seated next to Seki in the back. We talked about Japanese films and Canadian songwriters. I got drunk on whiskey, and they offered to release my music in Japan. I bowed and said arigato (without a trace of irony), then danced back to my hostel, the tallest man in Asia.

When Seki asked if I could find some bonus material for Amateur, I went rooting through my hard drives, and stumbled across this version of the record—the first one, from Rotterdam—like a shimmering jewel in the wastebasket of my career. It sounded pretty good. It had some songs that I'd forgotten about. We decided it would be the Japanese edition.

And with its release, a chapter in my life has finally ended. The Coronavirus stalled our plans, which makes this tale a five-year, five-country affair. I just turned 27, and like many people in their late twenties, I'm still untangling the mess I made some years before. I’m just happy it made it to your ears.